I am linking up for Manic Mommy Monday again, and boy has it been a manic last few days.

We have our HUGE family garage sale this weekend every year.  I really do mean huge!  I dream of finding garage sales this awesome.  We get lucky most years and have pretty good weather.  This year, we had decent weather with the exception of Friday.  We do however end up spending weeks getting ready for this sale.  This year, we actually had the sale open for two days last week, unintentional really, but we were setting up and people just kept showing up.  We also opened the sale on Wednesday and Sunday as well instead of the usual Thursday – Saturday.  We did great and sold tons, but it’s exhausting.

I will say, Maggie did awesome.  I was worried, how will my little 18 month old do at the sale when I know we are so busy…the answer is amazing!  I sometimes forget just how much she loves to be outside and play with dogs.  She played and played with no nap all of these days, and to my surprise, she wasn’t crabby until the end of the day when she had to go inside.  This definitely affected her nighttime sleep though, she whimpered a lot in her sleep.  More on that later in this post.

I get a call from D our yard dweller on Wednesday saying that it looks like our male dog Buddy (who doesn’t like D at all) has been shot.  Now, I am seriously worried and upset.  Buddy is old and pretty lazy.  He doesn’t stray too far from the front door and just lays in the sun all day long.  If somebody shot him, I guarantee they had to come into our yard and do it on purpose.  I was worried about my dog and feeling quite violated that the safety of our house had been compromised.  We bought a house with land so we could leave the dogs outside all day.  Even when I am home, Buddy is pretty much outside all day long.

I got home and tried to check it out.  D felt like he had to be inside talking to me while I was doing this which agitates Buddy and then I can’t check it out.  From what I can see, it does look like a bullet wound.  Great.   Next day, I have to wait until the vet opens to call – this was on his back leg and obviously not bleeding so I figured we didn’t have to make an emergency trip.  Well, the other thing about Buddy is that 1.  he hates leashes 2.  He hates cars 3.  He physically can’t get up into my SUV.  Getting him in for shots every year is difficult and now I am quite pregnant.  Fun times.  I didn’t sleep at all because I was sure I was going to wake up and have a dead dog on the living room floor.  Cry myself to sleep and wake up and cry more.  Borrowed a friends van to see if that would help.  She took Maggie with her, and surprisingly, Buddy hopped right in.  My friend and the neighbor both thought this was a bullet wound so I am not crazy.

Get to the vet.  They know Buddy, so they wait until there aren’t other animals in the lobby and look at him there instead of a room since he’s such a big boy.  He actually let me put the leash on without a fight and walked in without sitting down so he doesn’t have to.  We carefully muzzled him and he did pretty good.  He laid down and they shaved the area around it.  Well, good news, not a bullet wound.  Bad news, something got him and we don’t know what.  The wound looks so disgusting!  Poor boy.  3 puncture wounds.  He isn’t going to just let something attack him and do nothing, so I am wondering if an eagle thought he wasn’t as big as he is and swooped down or what it could have been.  He’s on antibiotics to fight any infection just in case and I am supposed to clean it 3 times a day.  That’s a challenge.  Hasn’t been cleaned yet.  Every time I try, he walks away and lays on it so I can’t clean it.  It’s tough to fight with a dog that weighs 106. 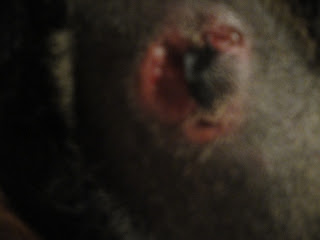 All week we left the house right away and weren’t home until at least 9.  I am exhausted!  Now, Maggie hadn’t been sleeping well for awhile, she was up every hour or two crying and thrashing around and I didn’t know why.  Look at her this morning….molar!  Looked at her later today….another molar.  Hmmmm.  Wasn’t expecting those two just yet.  I’m guessing that was our troubles, so maybe good sleeping for awhile.

Yesterday, Maggie got stung by a bee.  She is so tough, tougher than me.  She never even cried about it.  Not sure when exactly it happened, but it was all big and red.  I washed it and grandpa said to put on a band aid so I did.  I can say I have the only child I have ever met who hates band aids.  She ripped it off and screamed at me for putting it on her.  She’s had a tough week.  She had her shots Wednesday morning.  She is still in the 2 % for weight and head circumference and almost 20 for height.  My little peanut.  20 lbs 6 oz.

Aside from that, John found out he will be in Southern Illinois for awhile for work, so he is going to take the camper to stay in instead of crappy motels.  Now, D our yard dweller has been living in the camper for over a month now.  His phone didn’t work because he didn’t pay it, so he could get calls, just not  make them.  John kept calling to tell him, hey, the weekend of the 21st, you will have to find some place else to live because I will be needing the camper.  For two weeks he tried and never was able to reach D.  Finally he does and D acts like we owe him something and how could we only give him a short time to find a place to live.  He thinks he’s going to be living in the game room above our garage.  I am seriously annoyed.  If you have read a previous post about him, his dog and our male dog do not get along and attacked each other.

D also has to use our shower and bathroom.  It shouldn’t be that big of a deal, but it is.  He has a dirty job and we only have a tub downstairs, so Maggie takes a bath in there every night.  We have asked him, scrub it out when you are done.  It’s hard for me with my big old belly.  He won’t do it.  So before I can give Maggie a bath at night, I have to scrub the entire tub because it’s covered in dirt and body hair.  And he shaves and won’t clean up his facial hair.  Hello…..do I look like a maid?  John told him he can stay a big longer in the game room, but I decided if his dog causes one issue, I will kick him out that day.  Obviously, I am the mean one!  I finally sit down to rest at night, and he decides to get back to the house and the dogs start barking, so I have to quickly get up from my relaxed spot in front of my computer and let the dogs out so they don’t wake up Maggie.

Okay, I think that’s it for my Manic Mommy Monday post.  I have decided my life is awesome!  One day, John burns down the backyard on accident.  Then we lose a bunch of siding, now my dog is attacked by something.  Ahhh joy 🙂