I thought that since I didn’t do this yet, I would talk about this for now.  Our beginning….how we met.  Not the worlds most romantic story, but not the worst either.

I was sitting at my friend M’s house, like I usually did on a Friday night.  The two of us both had a crappy attitude this particular night.  The week had been rough.  It was the anniversary of when my parents died, my purse had been stolen that same day…I really wanted to get my drink on….so I did.  We would usually have just a few beers and sit on the deck, but this night, we bought a few cases….not expecting to drink them all!  We had a few more friends stop by to visit, and we all sat in the garage.  Before we knew it, her and I had drank over a case ourselves…yikes!  Then one of the girls’ brother showed up with his friend.  This friend was John.  Now, anybody that drinks knows that inevitably you have to pee….a lot!  I went to the bathroom and came back to the garage to find that John had taken my chair.  He thought he would be funny and not give it back, so I told him to give it back or I was going to sit in his lap.  Turns out this was his plan…..Then in my drunk *whisper* I kept telling my friend M how HOT this guy was!  Seriously hot!!!!!

Some of the details are a little fuzzy, but the next thing I knew, we were sitting in a garage full of people making out like school kids.  Classy, right?  At some point, we apparently exchanged phone numbers, although I have no recollection of this at all.

The next day, my phone rings and it says his name…now I was confused…how did that get into my phone.  Interesting.  How sweet, he called to say hi and see if I wanted to have lunch.  Of course I said yes.  But boy was I nervous!  After all, I had drank a lot, maybe he wasn’t really hot at all…Then he showed up at my place….on his motorcycle, just to add to his sexiness.  Well, turns out, he was every bit as hot as I remembered!  So I hopped on his motorcycle with him in my skort…after all, I was trying to be cute and I had nice legs!  We had a great time at lunch, turns out he was just as nice as I remembered too.  Opening doors and everything.  From then on, we were both hooked…on each other. 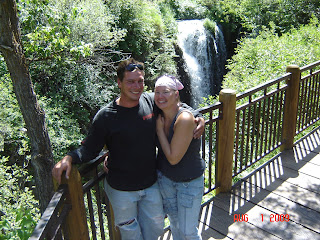 That August, we rode out to Sturgis and then out to Colorado on the motorcycle and had a great week together.  We fell in love and decided we wanted to have a family together.  We talked about getting married first, but at the time, my sister was supposed to get married when she was home on leave from the navy, and I didn’t want to have to wait another year and then have babies, I was already 30 and want 5 kids.  So we ended up pregnant after only 3 months with our daughter.  What a blessing!  Now we are pregnant with baby #2.

Things aren’t always butterflies and rainbows for us, but we are doing okay.  It’s been rough lately, but I have no doubt we will get through this and enjoy the rest of our lives together.

Are you having a Manic Monday?  Link up and tell us about it.

Why I know my baby is the cutest baby EVER!!

My week of vacation…..or not….