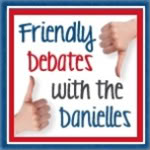 Friendly Debates With The Danielle’s

Would you consider surrogacy?  Yay or nay?
For me, the answer would be yay!  At least I think so.  Oddly enough, a good friend and I were discussing this a few months back.  Truthfully, I probably will never be in a situation to decide because I want 5 kids and am only pregnant with my 2nd right now, so by the time I am done, I would most likely be too old to be considered.  I will be 33 when this baby is born, and while we want them all fairly close together, I will still be 39 or so when I am done.
A few years ago, a friend of mine was looking for a surrogate.  They had their first child, and their baby had MS.  (I believe this is what he has, I hope I’m not wrong).  It was passed from his mom, who didn’t know she had MS until after the baby was born.  They wanted another baby, but not the risk of having another baby with MS.  When he asked me about it, I was thinking, helk yeah, of course I will…but only if you can wait until I have my own baby first.  I knew that wasn’t realistic though.
I wanted to know what it felt like to have a baby before I committed to helping him and his wife.  I don’t know how I would handle having to give up the baby when it is time, but I would love to help.  I get so emotionally attached to the baby in my belly, but if I went into it knowing it wasn’t my baby, maybe that would be different.  I would absolutely love to help out a friend who desperately wanted a baby of their own.  I have a few friends who are trying so hard to have a baby and it’s not working for one reason or another.  They are well deserving and would make great parents, and to know I had a hand in helping them with their dream would mean a ton to me!
How do you feel about this?   Would you be a surrogate?