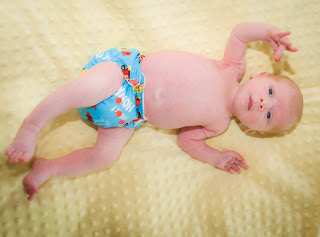 Back in October, we found out we were going to have baby #2.  I was super excited!  That meant newborn cloth diapers!  That excitement was met with a bit of hesitation.   John didn’t want to use cloth on the new baby because he was sure they would be too bulky.  I couldn’t argue that point, I thought that one size diapers would be too bulky on a newborn.  That had been his concern since we started using cloth with our daughter when she was about 5 months old.  I was determined though, I mean, have you seen how cute newborn fluff is?  So I took him to the local cloth diaper store and once he saw the newborn diapers, he was on board.  The newborn diapers are much more narrow between the legs than one size diapers.  Even though it meant we would have to buy some more diapers, he gave me the green light.
So, what is in our stash of newborn diapers?
1 Smartipants
2 Kissaluvs SizeNB
1 Fuzzibunz XS
1 AMP
8 Lil Joey’s
4 GroVia NB
4 Swaddlebees NB
and some WAHM fitteds, AIO’s, a NB cover, 2 small covers  and 4 NB Flats.

Why buy newborn diapers you might ask.  I already own one size diapers, won’t they fit?  They say 8-35 pounds (varies by diaper), can’t I just use these?  The answer, yes, you can use one size diapers on your newborn for the most part.

While the one size diapers do fit him like they say they will, they are much more bulky and I often have trouble putting his clothes on over them.  Because of the bulkiness of some of them, I wasn’t able to get a tight fit around the legs which led to leaks.  One exception that I did find was the Fuzzibunz One Size Diapers. Wearing the Fuzzibunz, I was able to get a great fit and these are still trim diapers.

I haven’t tried a ton of one size diapers on him yet though.  Partly because I love the newborn diapers so much, but partly because we don’t like the bulk.  We have used our new Babykicks Premium Pocket diaper without leaks, but we weren’t able to crossover the tabs to accomodate a smaller waste, so that’s something to keep in mind.  We tried out our Ones and Twos diaper on him also, and it worked pretty good, but wasn’t m favorite.  It did leak a few times, but I think I just needed to adjust the fit a bit more.  We have used our Softbums on him a few times as well.  The diaper never leaked for us, but isn’t my favorite yet.  We have many more diapers we will be trying on him now that are one size, but having the newborn has made me want to opt for sized diapers for when they are still quite a bit smaller.

If I had to do it all over again, would I buy newborn diapers again?  Absolutely!  They are fantastic and fit him so well.  He is now 14 pounds and I am still able to squeeze him into a few of them.  The Swaddlebees and the Fuzzibunz XS are able to fit him longer than the Lil Joey’s and Grovias.  Not only are newborn diapers designed exclusively for little babies, but many of them also have snap downs for the umbilical cord.  A definite plus so that I didn’t have to worry about the diaper rubbing up on his cord stump.

I wish I had more Fuzzibunz XS.  They have quickly become my favorite newborn diaper and I only have 1!  It is also the only pocket newborn diaper we have used.  I will definitely get more of them for the next baby.  Not only are they are favorite, but they also dry faster than the rest of our diapers.  When we made the decision to use newborn cloth diapers, we decided that we wanted to use the Lil Joey’s on the baby, so that is what we had the most of.  I had heard mixed reviews, so wasn’t sure if that was the best route to go or not.  I ended up loving them!  To start with, I LOVE prints!  And the firetruck print is so adorable!  They have the inner gussets as well, so they contain little Charlie mans EBF poop every time!  The only time we really had leaks with them was if he was laying on his side.  The Swaddlebees were awesome diapers as well, but you have to be sure to have the diaper just right.  If the white from the inside is curled out even a little, they have leaks.  Once I realized that and checked it, I didn’t really have leaks with them.  Plus, cute dinosaur print!

If I were on a tight budget and needed a truly One Size diaper, I would highly recommend the Fuzzibunz One Size diapers.  The way they are designed, they are so trim even when sized down to the lowest setting.

After all is said and done, I highly recommend getting some newborn diapers for your stash if you are having a baby.  It is nice having the diapers that are designed solely for a smaller sized baby.  Many of the one size diapers tend to have wider leg openings, so it’s hard to get a snug fit and no leaks.  There are cheaper options using newborn prefolds and covers, but we didn’t use them as much.  Even now, John has agreed that they were worth spending the money on and he wouldn’t have it any other way.  That says a lot to me, he hates spending money when he doesn’t have to.  Plus…we had a summer baby this time, and since it is so hot, we could put a shirt and his diaper (and little baby leg warmers) on him and show off his cute, yet still tiny fluffy little butt.  How can that not make somebody want to make the switch to cloth!

How I teach my kids about church…and what they learn

Blogger #beachbash Are newborn cloth diapers worth it? and $15 Kelly’s Closet Giveaway