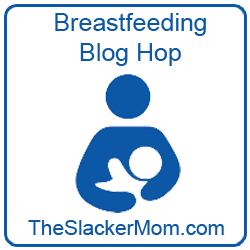 I am finally linking up with the other great mommies for this weeks hop.  I have been missing for a few months.  The end of my pregnancy was exhausting and now the little man is here, I haven’t had two hands free very often.  Our topic this week is free for all.  Any breastfeeding topic we want.
First off, I will say how very lucky I am that both of my children have latched on like champs and nursed so well right from the start!  I know many people have struggled with that and I am glad that’s one thing we could do effortlessly.  Well, mostly effortlessly anyways.  Charlie man latches good, but when he lets go, he needs a little assistance to find it again.  In his defense, he isn’t even a month old yet, so I am sure he will figure it out.  Maggie had a homing device on my boobs!  She could find those babies from across the ocean, I swear!  Charlie is so funny to watch.  He is so gentle, sometimes I actually have to check to make sure he is really latched on.  I can barely feel him.
I can say, this time around, my milk supply needs less help than with Maggie.  I prayed so hard for this!  With her, I had to feed him, pump, then the doctor wanted me to offer her formula.  I felt like that was all I ever did was feed her, pump, feed her, pump.  It was exhausting!
This time, I hardly ever pump and Charlie gets a full belly.  My milk came in before I left the hospital.  A day or so later, I was very engorged on the right side…sadly, I was somewhat excited!  I knew I was making a lot more milk already!  What a relief.  After days of fighting with that, I don’t quite make as much milk on that side as it seemed like I was before that happened, but I still make plenty for the little man.  He gets enough milk, that most nights, he will try to go without waking up most of the night.  Right after we got home from the hospital, he pretty much only wakes up once a night.  That’s not a bad thing, considering Maggie is 21 months and still wakes up at least once a night, but then I end up pumping in the middle of the night if I can’t get him to eat.

I am also tandem nursing which is going much better than the rest of the world seemed to think it would.  Everybody was so concerned that Maggie wouldn’t share or would get mad.  Mostly, she tells Charlie, boob Charlie, eat eat eat!  Don’t get me wrong, there are times she doesn’t want to share or tries to demand it for herself, but generally only when she is tired.

I would love your advice though…..for those of you with a toddler and an infant, how did you ever find time to pump?  I only need to pump enough to get me through an hour a week while I play softball, but finding time is so hard.  I can’t really set him anywhere where his sister can’t get at him.  She isn’t mean or anything, but she loves him so much and constantly wants to hug and kiss him or read him books or make him play with her toys.  She’s so sweet, but not nearly gentle enough to be left alone with him.  That leads to me having no chance to pump most days.
Want to link up with your breastfeeding posts?

Breastfeeding Blog Hop – Free for all

Summer #BlogChallenge July 26 – My superpower would be…..