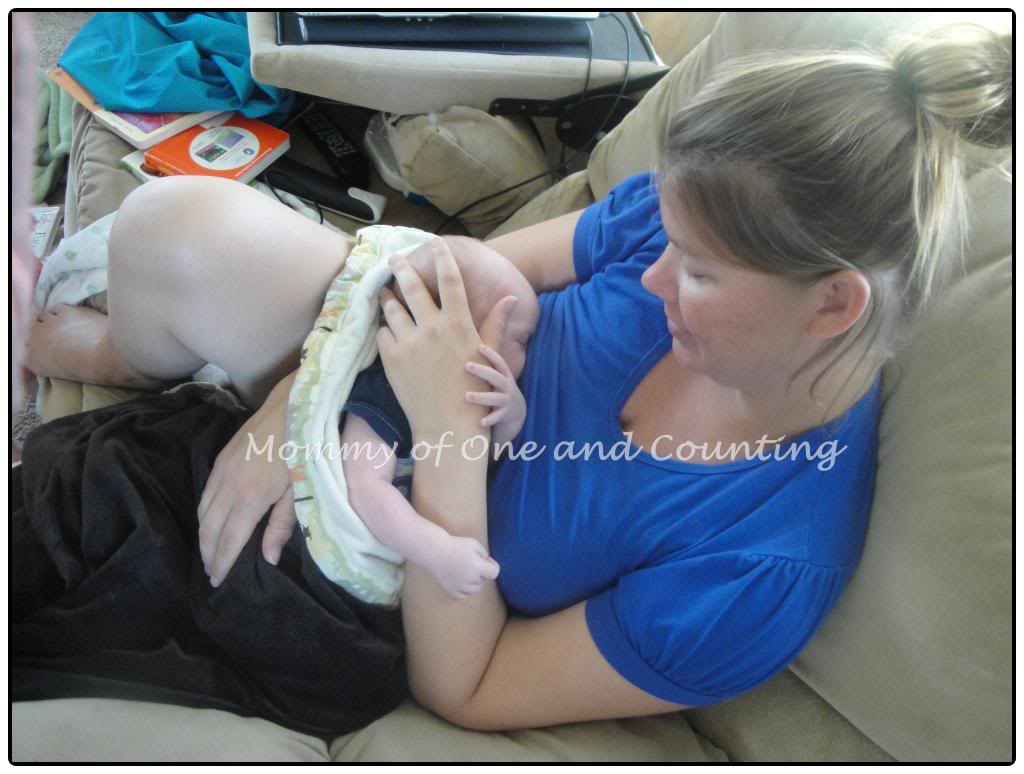 When baby gets sick, one of the first questions many moms ask is, “Should I continue breastfeeding?”  The answer is absolutely!
Both of my babies nursed for comfort, Maggie more than Charlie, but they both do it.  If they aren’t feeling well, they really want to nurse.  If they are stuffed up, sometimes, they get frustrated when they are nursing because it can be difficult for them.  There are a few things that can help.  One is to hold them more upright then you normally do.
You will probably find yourself nursing more often than normal.  Baby may not eat as much as usual, but still wants to get enough food.  Plus, shorter meals means more constant antibodies passing from you to baby to help boost that little immune system that is already fighting something.
My little Charlie man was pretty congested when he was only a few months old.  I was so worried and felt so bad for him!  He was so tiny and fragile.  The best thing for us was to go sit in the bathroom with the hot water running and steaming up the bathroom.  We sat for about 15 minutes at a time a few times a day.  It made a world of difference!

But what if baby is vomiting or has diarrhea?  That can be tougher.  {This post makes me feel like I have a couple of sick kids, but we have been sicker over the last few months than we have been in the last few years!}  Charlie caught a stomach bug a few weeks ago, I’m guessing from baby class, but who knows.  His farts were so awful smelling!  Yet, it didn’t strike me as odd until he had what appeared to be diarrhea, and then vomited a whole bunch all over me.  Then, repeated that a few hours later.  Not fun for my handsome little guy.  I of course called the nurse line.  What she said made sense to me, at least most of it.  She said to try feeding him for only a few minutes at a time.  If he continued to vomit, she said to not allow him to eat for at least an hour.  Then, if he continued to vomit, then to give him Pedialyte or something similar if he showed signs of dehydration.  That was hard for me to hear, and I prayed so hard that he wouldn’t continue to vomit!  He ate, then threw up on me again, so I waited at least an hour – now, this was so late at night and he wanted to nurse, snuggle and sleep, so this was so hard.  Eventually though, he fell asleep after at least an hour of walking and snuggles.  The next night, we repeated this exact same thing!  Then, it was gone.  We didn’t have to cut out any nursing sessions thankfully.  The Pedialyte bit bothered me.  I felt like even if he was throwing up, he was still getting antibodies and nutrients from my breastmilk.  Plus, he doesn’t take a bottle, so if we ended up going that route, it would get tricky.
If baby isn’t nursing, don’t forget to pump!  You don’t want your milk supply to drop, especially when baby is likely to be wanting it very soon again!
So, should you continue to breastfeed when baby is sick?  Yes, definitely, absolutely.  Your milk is best for baby every time.  Are there times you need something more, yes but rarely, and still offering your breastmilk is best.  These are our tips for breastfeeding through sickness, but hey, I’m not a doctor!
What are your tips for breastfeeding through sickness?
*This was written as part of the Breastfeeding Blog Hop*

Cheering our team on with Rachel Beth’s Cloth Creations {+Giveaway}