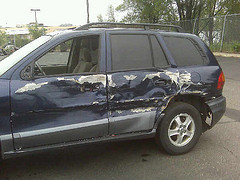 I feel like this should be a really easy topic.  It’s not.  To be honest, I can’t remember when exactly I realized I loved him.  Maybe the day that he “rescued” me.  I was getting some paperwork signed for a house I was listing.  I left there and excitedly drove to where my softball tournament was.  I was already bummed that work had interfered and I had already missed a game.  I couldn’t wait to get there for the next game, even though it was pouring rain out.
Well, some idiot was driving all crazy and in and out of lanes to the point where I had to adjust where I was driving to avoid him.  It didn’t work.  Too much rain on the road and too many moves from him.  I ended up hitting the back end of somebody’s car all along the front and side of my Santa Fe.  Totaled my car and made me more late. John happened to call around that time while I was waiting for the tow truck to show up and offered to come pick me up and take me to the softball game.  What a guy!  Plus, it was kind of fun, nobody at ball had met him yet, so when they asked who he was, I just told them that he was some hot guy who stopped to see if I was okay and i had him bring me to ball.
Not really sure if that was when I knew or not, but that day stands out in my head.  He took time out of his life to drive me around and look for a new vehicle.  And, he let me use a vehicle until I found one.  What a guy!
How about you?  When did you know you were in love with your other?

Cover that bum in fluff! Blogger signups for Switch to Cloth