I come from a long line of game players.  You see, I have a large family.  There are 25 or so of us at any family gathering.  I love it that way because it means there are always game players, no matter what game we play!  We are always itching for the latest new game to play, and were all excited when I called to tell them I had one for the weekend that we had to play because I had to write a review about it. 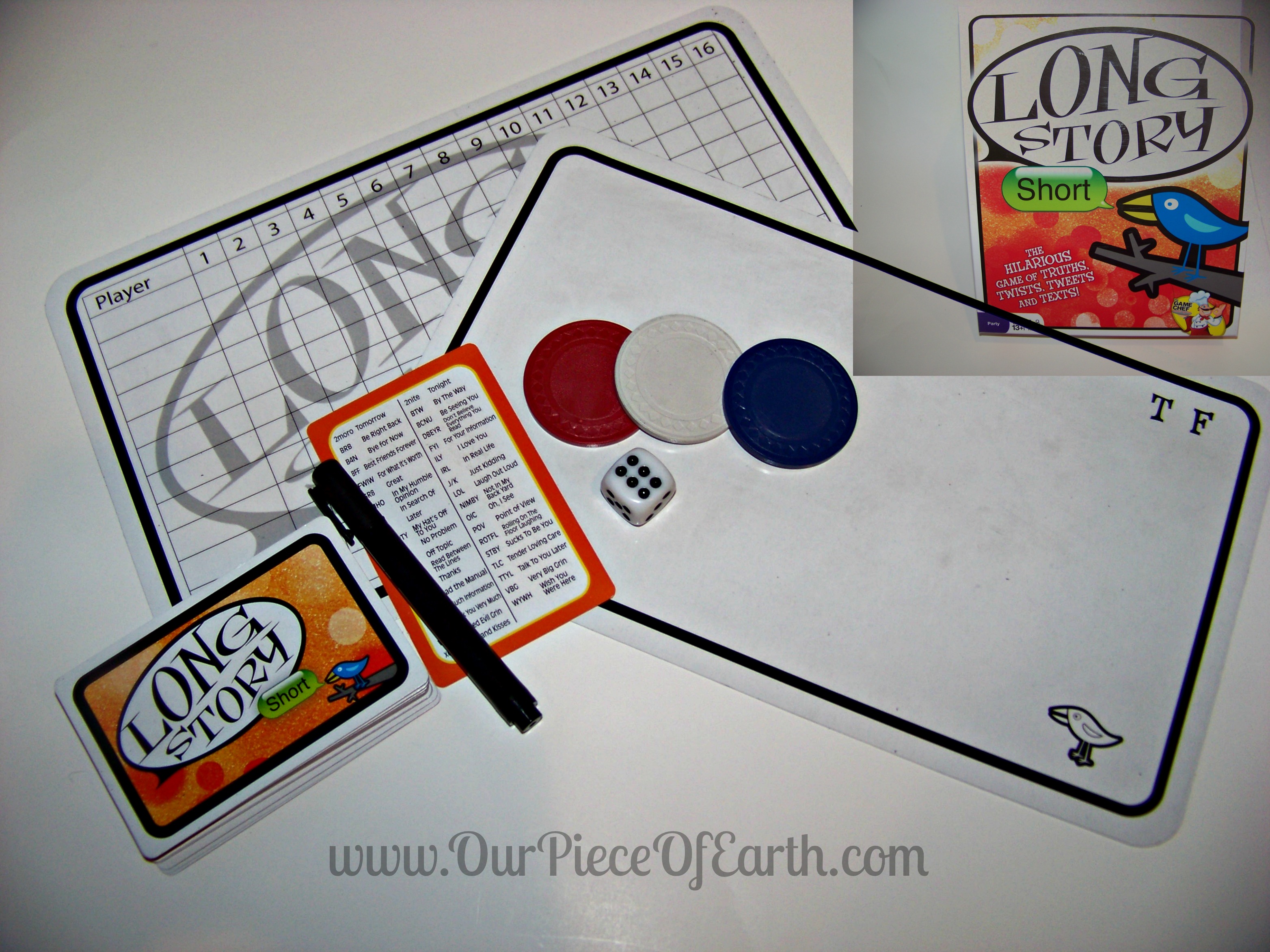 I was curious how this game would go, but was sure a certain teenage girl would love it because you get to play it with your phone if you want {but you don’t have to}.  Long Story Short is a game that is super easy to learn and great for all ages {well, it says 13+, probably not too far off}.  Merging family fun night and social media has never been so FUN! 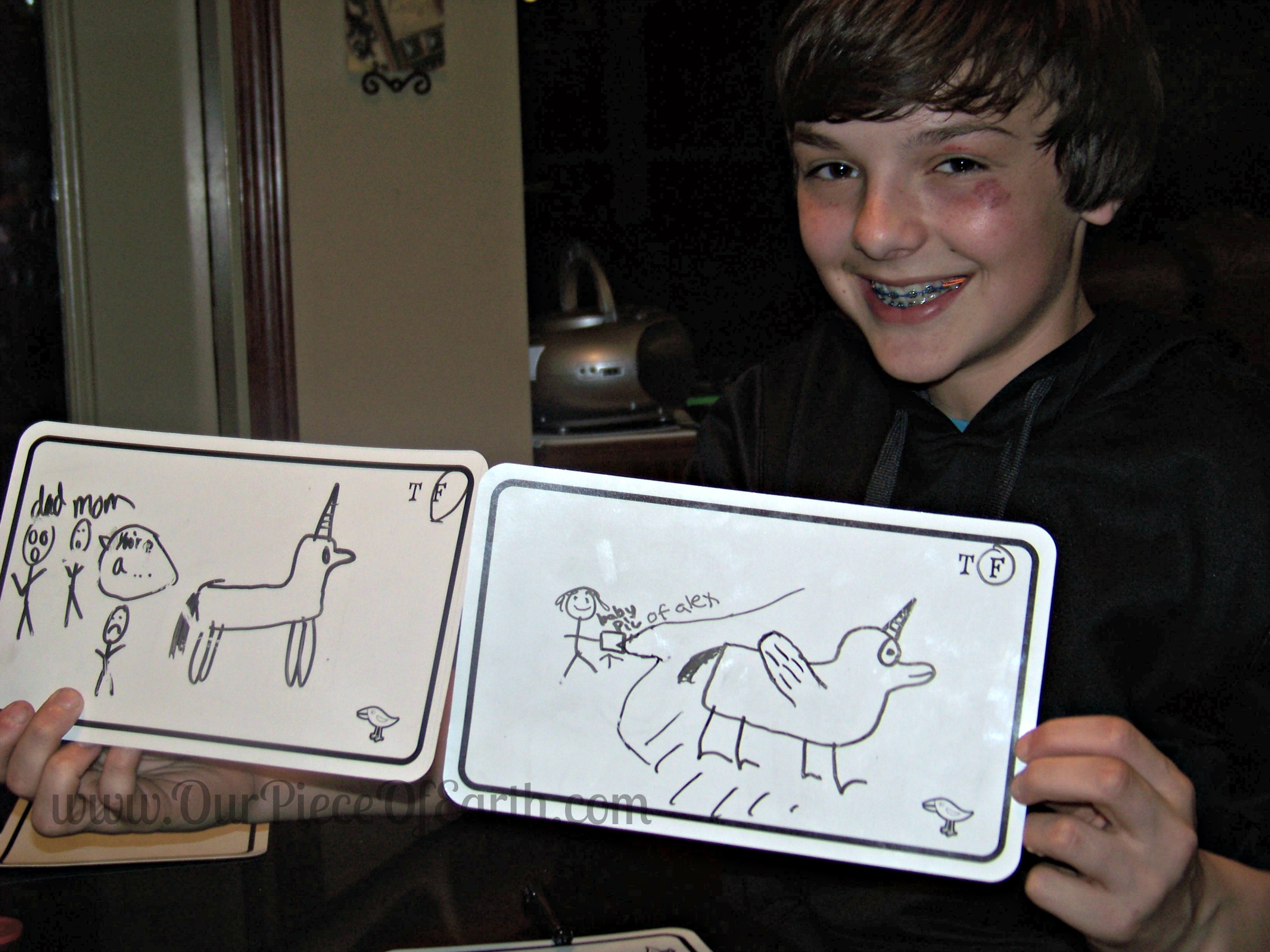 When it is your turn to be the storyteller, you tell your story using the story starter.  It can be true or false.  Then, all of the other players create either a headline {think Facebook}, drawing a picture {Pinterest-y}, write a text, or tweet something.  What you have to do depends on what the dice says.  They also decide whether they think your story was true or false.

When it was my turn, my cousin tweeted something that had me almost peeing my pants.  Seriously folks, best hash tag ever!  #allnightergonewrong  What made the game really fun was that my aunt didn’t know what a tweet was, so that made it a bit more interesting.  She kept saying pound sign instead of hashtag.  That alone triggered some giggles.  If you get the text option, you can either write your text on the board or use your phone and text it to the storyteller.

Now, Jen and I play this game where we both say we are the favorite child {I think I’m the only one who thinks it is funny}, so when her story was about Christmas and not getting what you wanted, this is what I had to say.  Yep, I’m pretty darn funny! 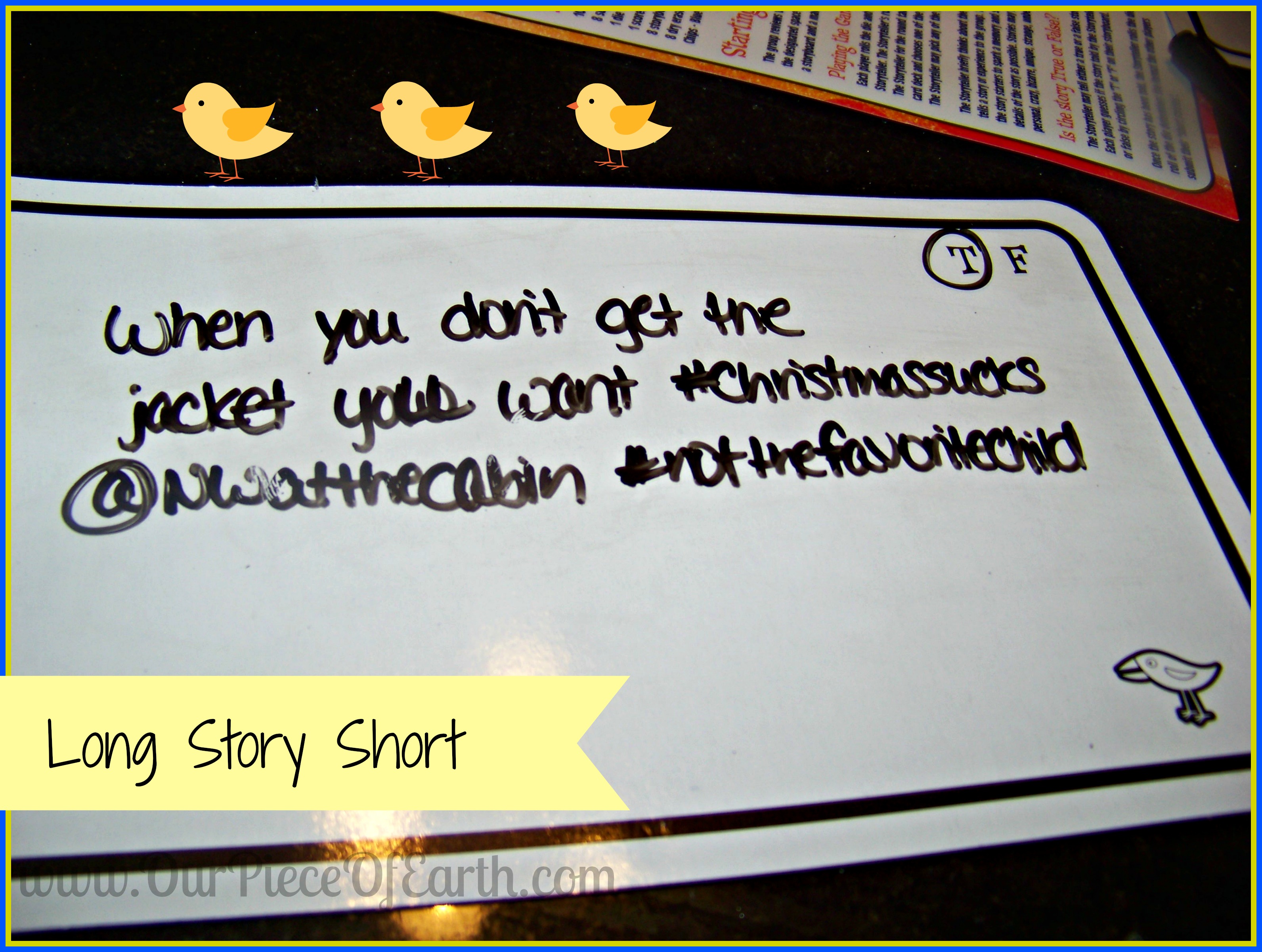 The storyteller gets to choose a winner based on their picture, use of hashtags, abbreviations or entertainment value, and assign first, second and third using the round tokens.  Play with 4-8 players. 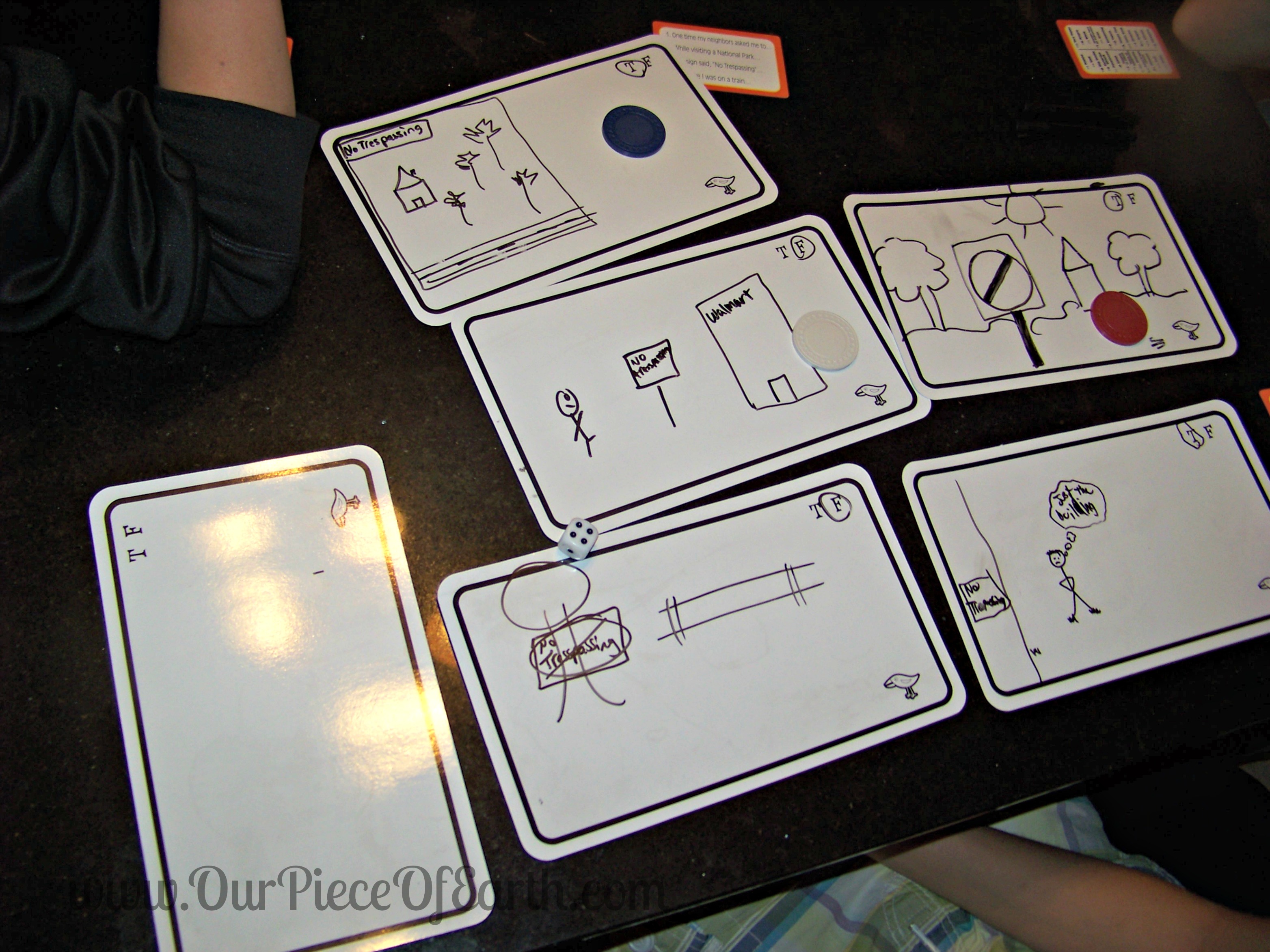 If you are looking for a fun game for family game night, or even a party game that will get everybody ROTFL, Long Story Short is a winner! 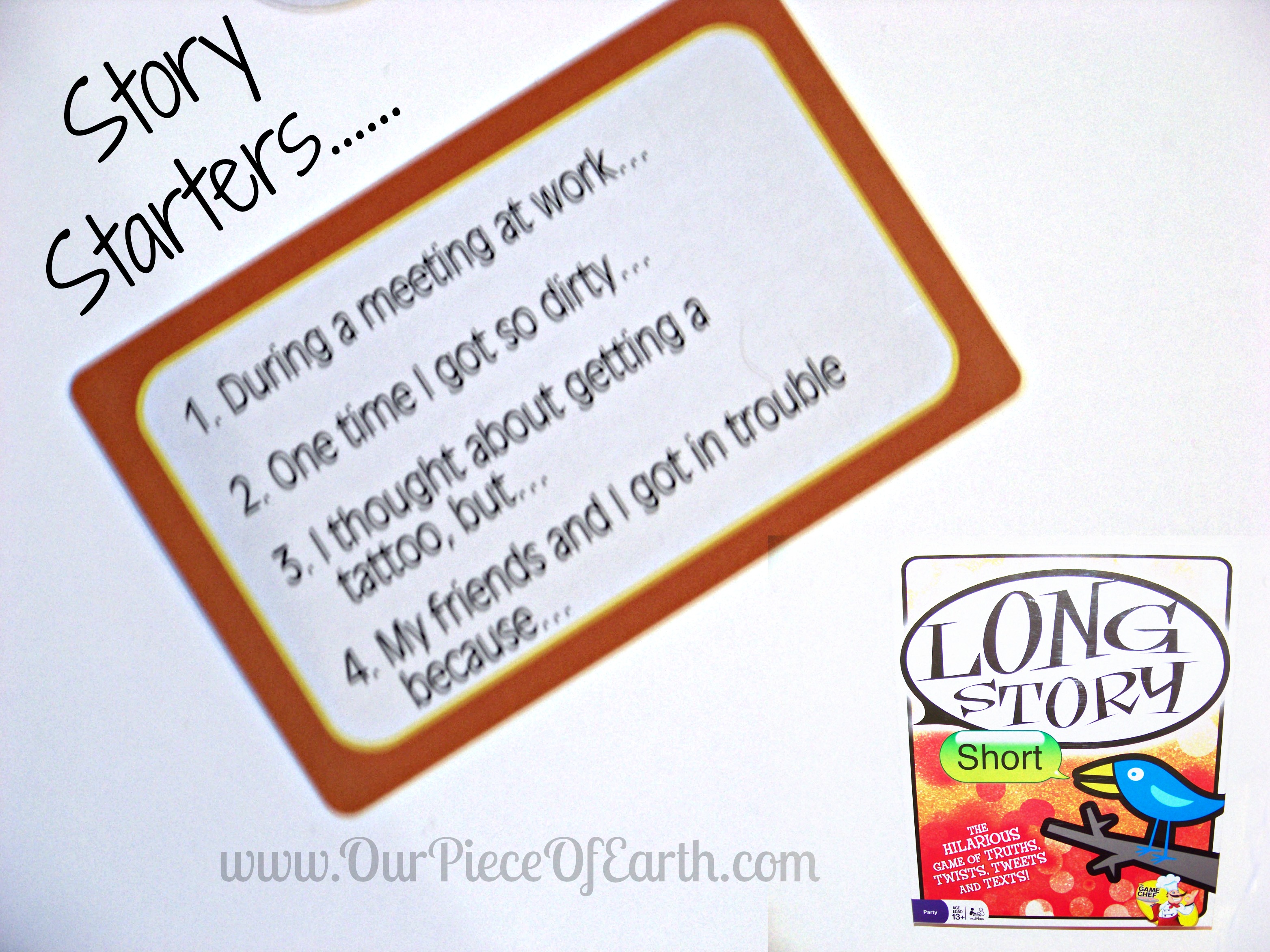 Pick your story starter and share your story with me in the comments.  See how much fun this game can be.  Who knows, maybe somebody will make your long story short.

Congratulations to Alison T.
*Disclosure:  I received the above mentioned product for the purpose of this review.  All thoughts and opinions are my own.*
Tags:family, family game, family night, giveaway