You know how all babies are different?  Well, this handsome little Henry is a lot similar to his older sister and brother but also a lot different.  I’m not the only one who has noticed and have heard from others that they notice the same thing – he loves to play.  Now, I know all kids love to play but he seriously loves it.  He isn’t quite one yet, a few more weeks but he has been playing hard for months already.  He is content to sit and play with his toys for way longer than any other baby I have ever seen. 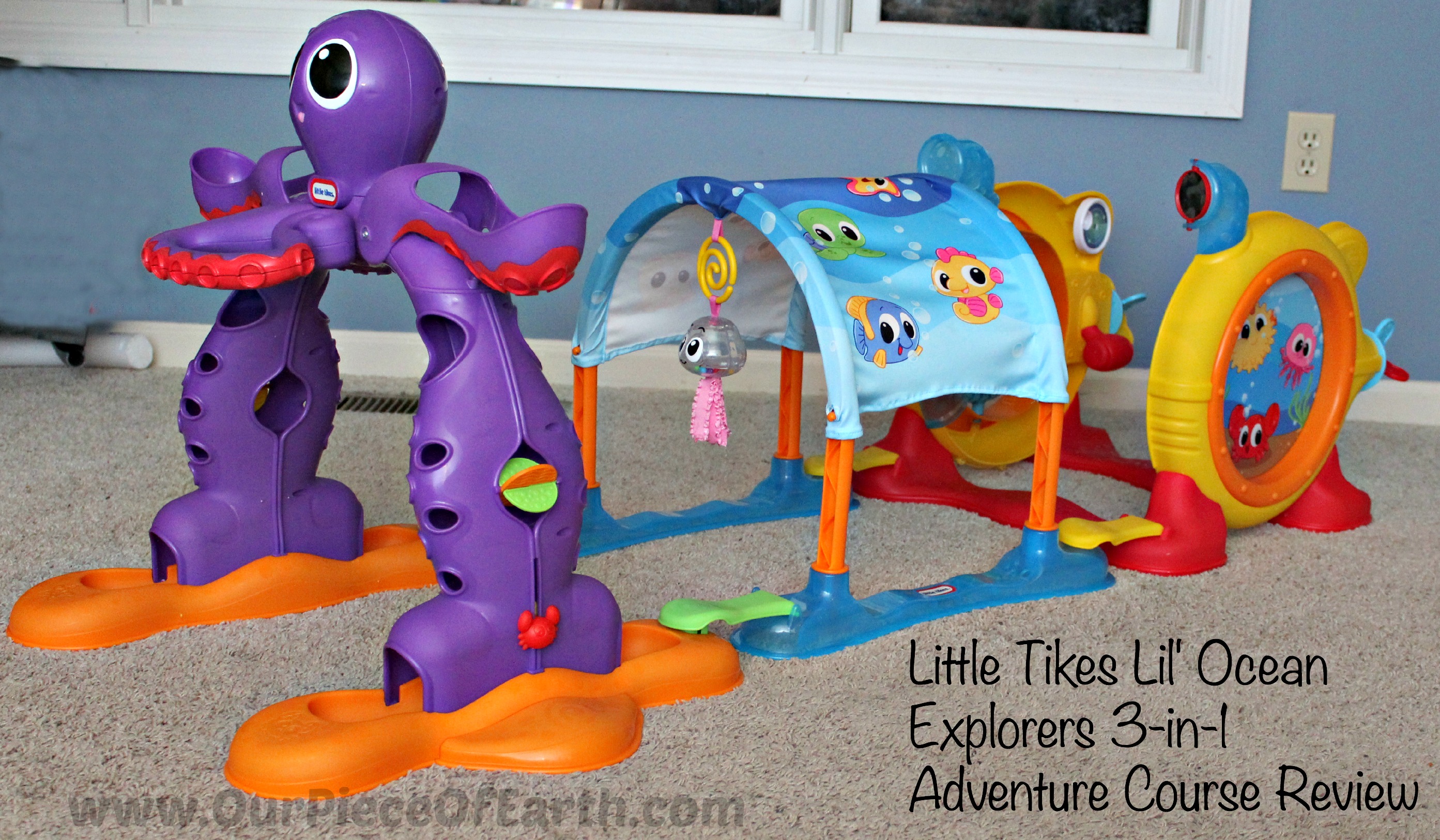 When we had the chance to review the Little Tikes Lil’ Ocean Explorers 3-in-1 Adventure Course, I knew that Henry would absolutely love it.  Whether it could stand up to my rambunctious three year old living in the house was another story.  So far, so good and I’m not surprised, after all, it is Little Tikes and we love their products because they can withstand the “use” that kids put them through.  Let me tell you about this seriously fun adventure course.

The Little Tikes Lil’ Ocean Explorers 3-in-1 Adventure Course arrives needing to be assembled.  I hate assembling things because I have three little “helpers”.  That 3 year old – he likes to hide things like screws so he can put them in later.  There were not a ton of pieces to assemble and most of them snap together, with the exception of the octopus who needs batteries {not included} and screws.  Once assembled, here is what you have.

There are three separate pieces:  The submarine, the octopus and the underwater tunnel. The pieces can be used interchangeably by snapping the pieces together. 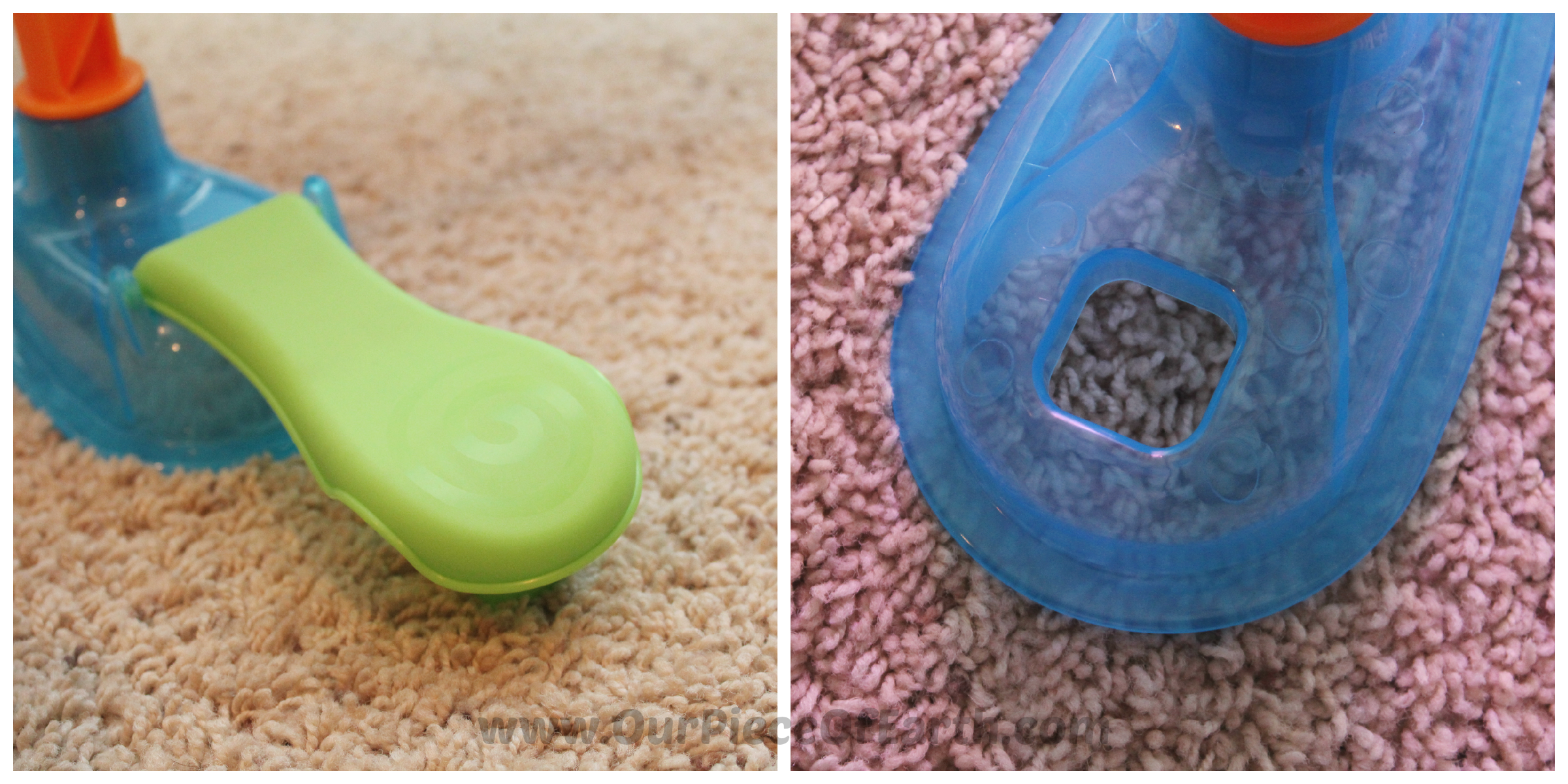 There are snap arms on the submarine and tunnel and squares on the octopus and the tunnel.  You can set them all up in a row or arrange them.  You can also use them each independently. 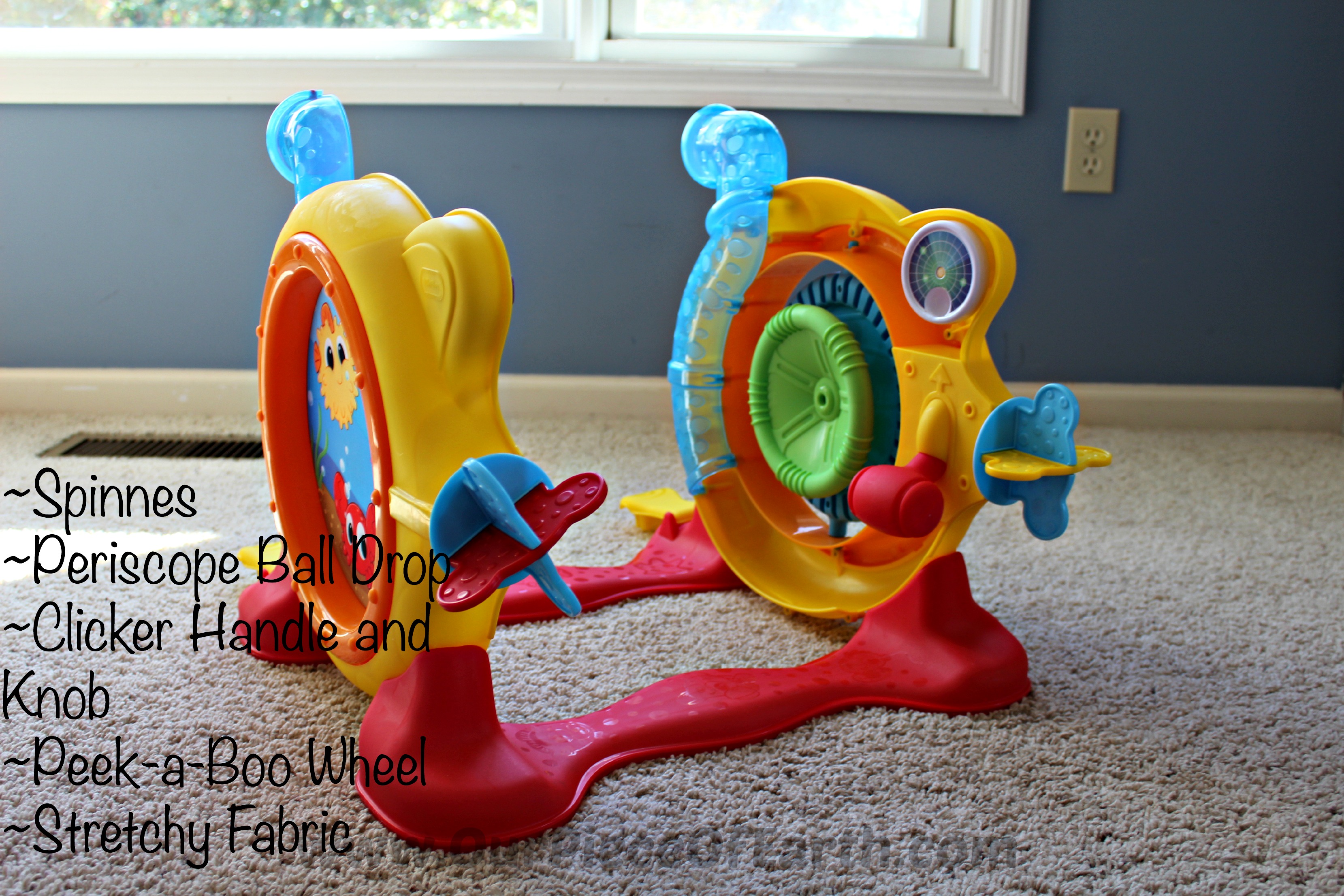 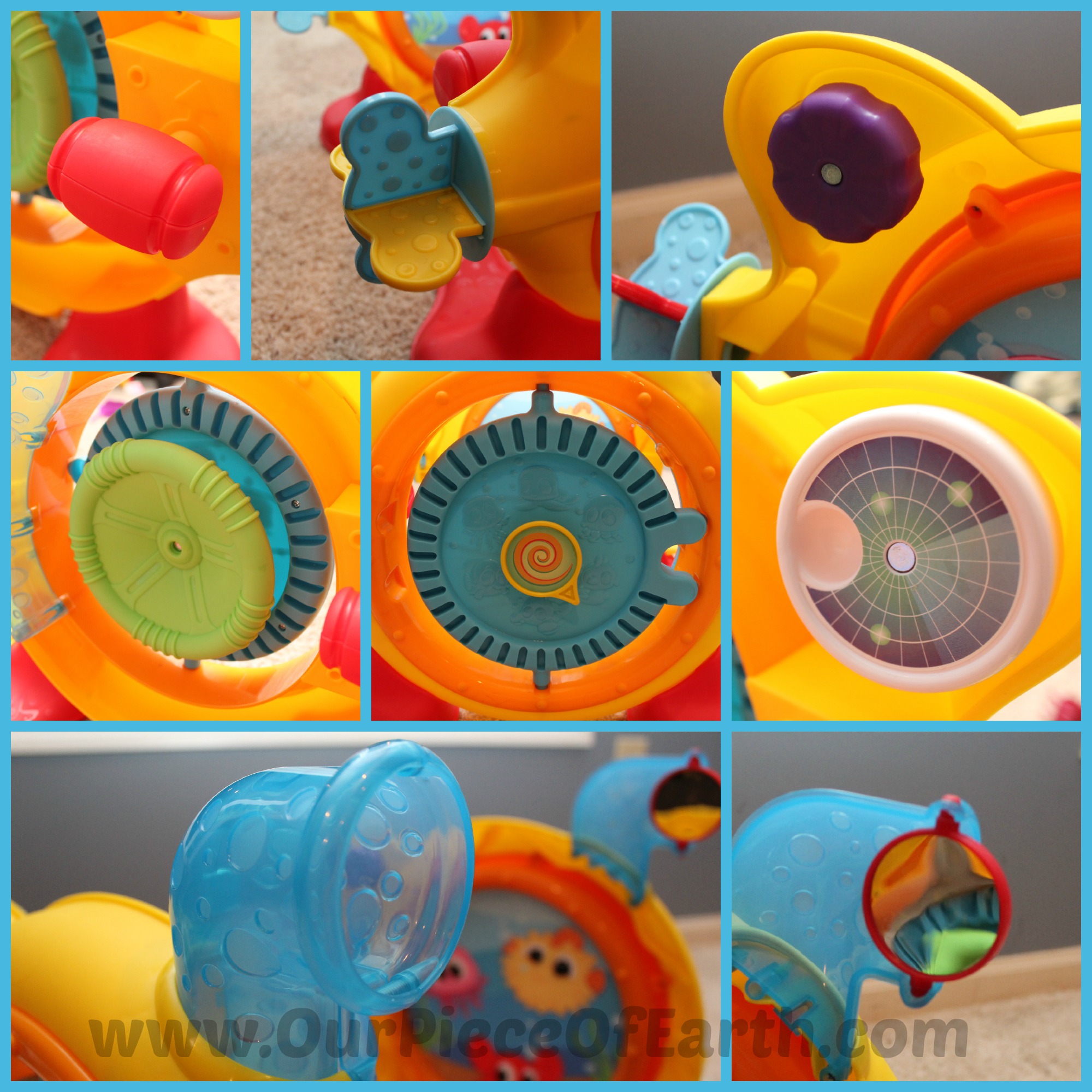 The submarine is perfect for those babies sitting on their own.  With so many things to do to keep them engaged, they are sure to have a blast.  Henry has so much fun sitting there and dropping the ball down the periscope.  Every so often he notices the spinning mirror and starts laughing at himself.  There is also the clicker knob, the handle, the stretchy fabric they can push on and the spinners on the back.  I love the rotating wheel that is perfect for us to lay down and play peek-a-boo with him.  There are so many moving parts on this part of the toy, I love it.  This is probably Henry’s favorite part and he spends lots of time each day exploring here. 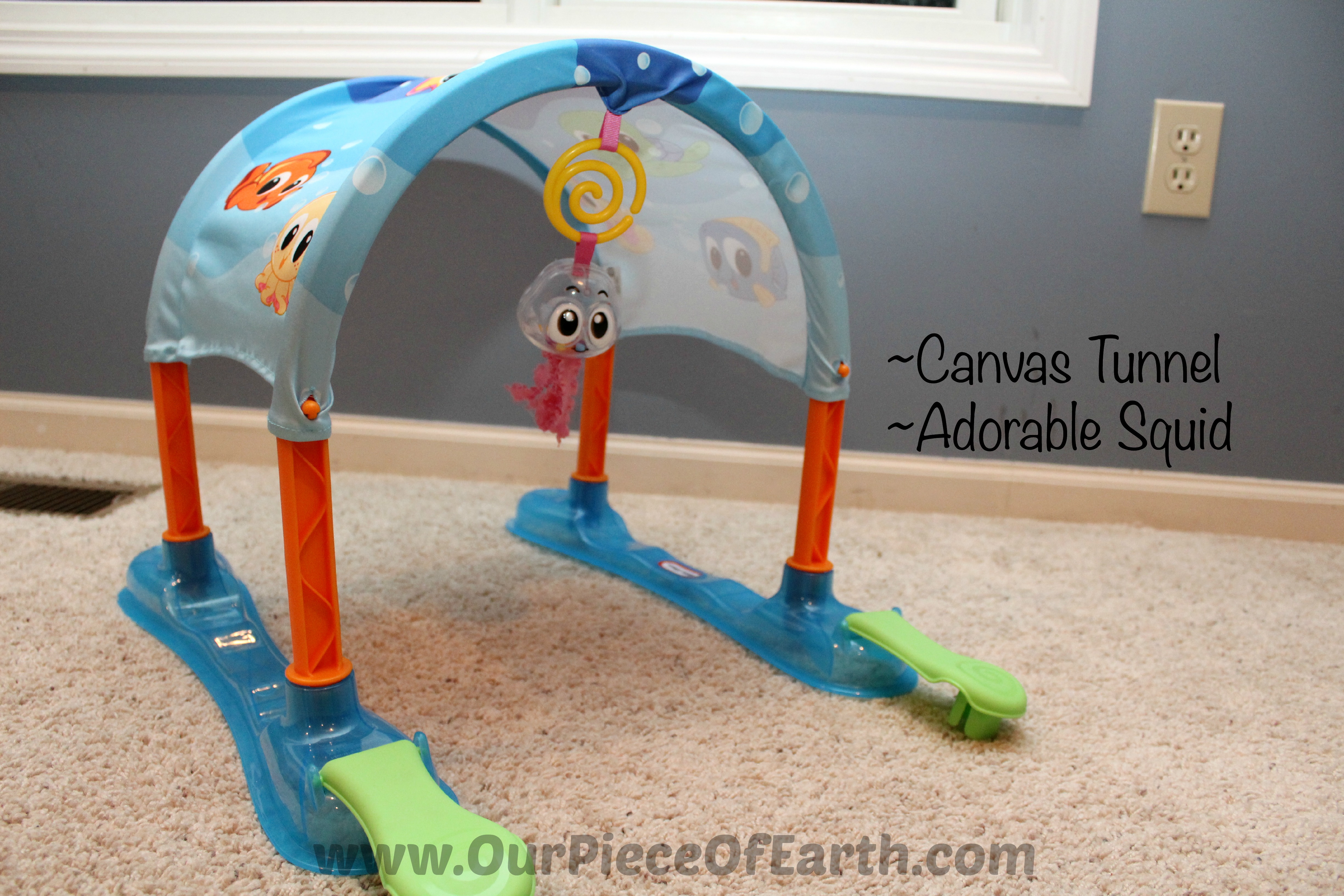 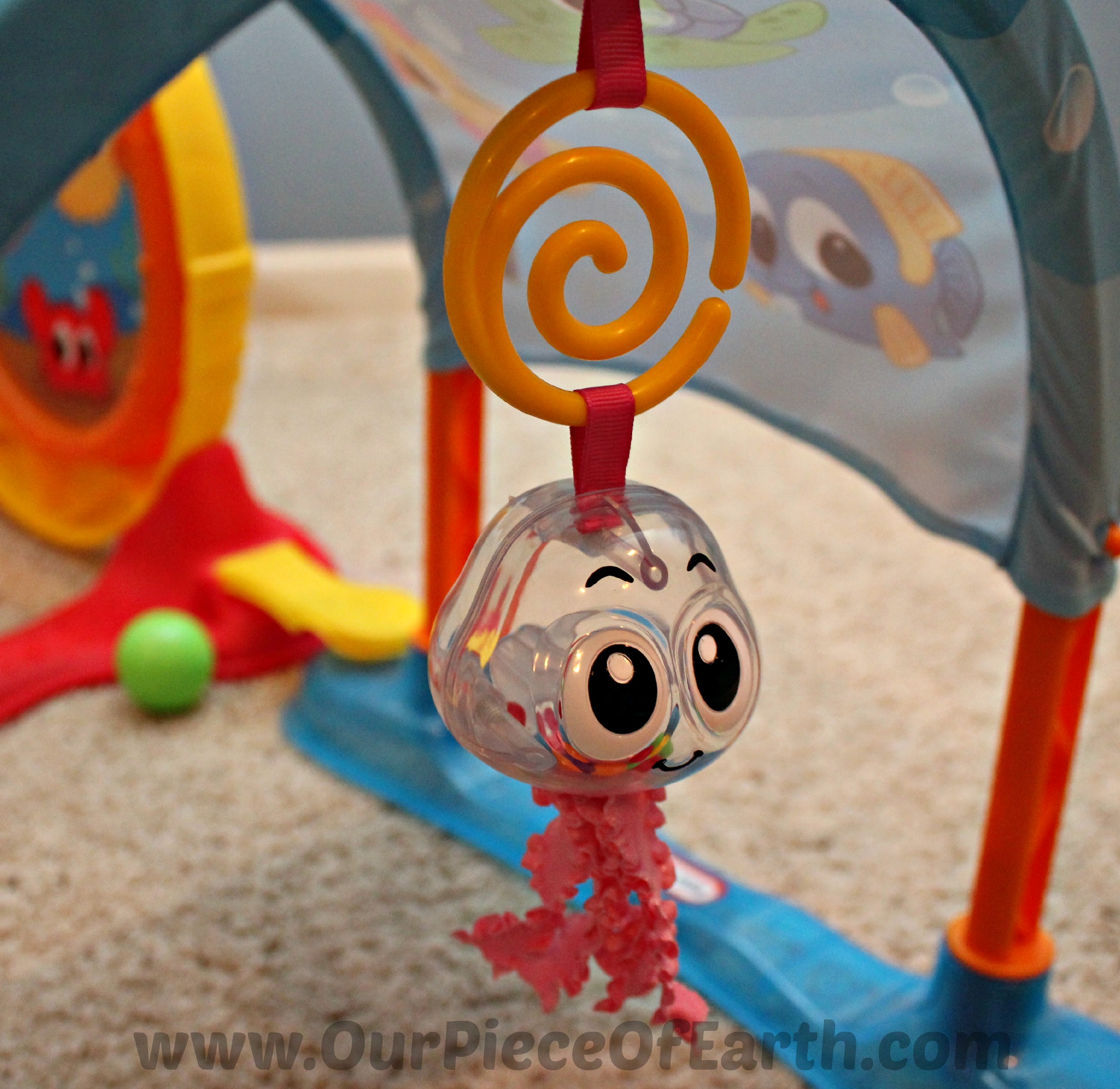 The underwater tunnel has a fabric cover full of colorful underwater creatures.  When your baby is done crawling in and out of the underwater tunnel, you can spend time exploring the colorful fish together for a fun learning adventure.  You can hang the adorable squid rattle for even more engaging fun.  Charlie keeps taking it off so it randomly disappears around here. 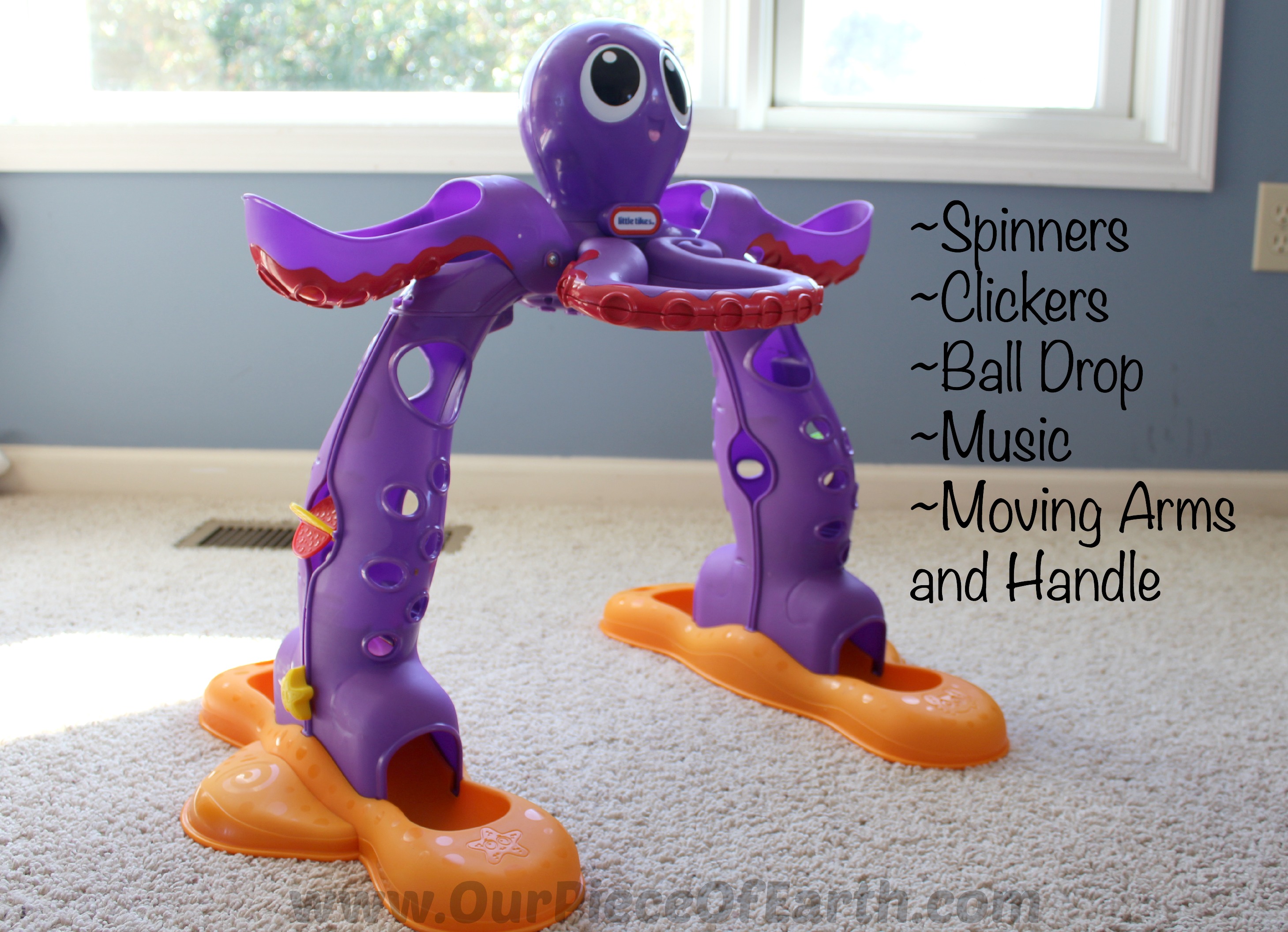 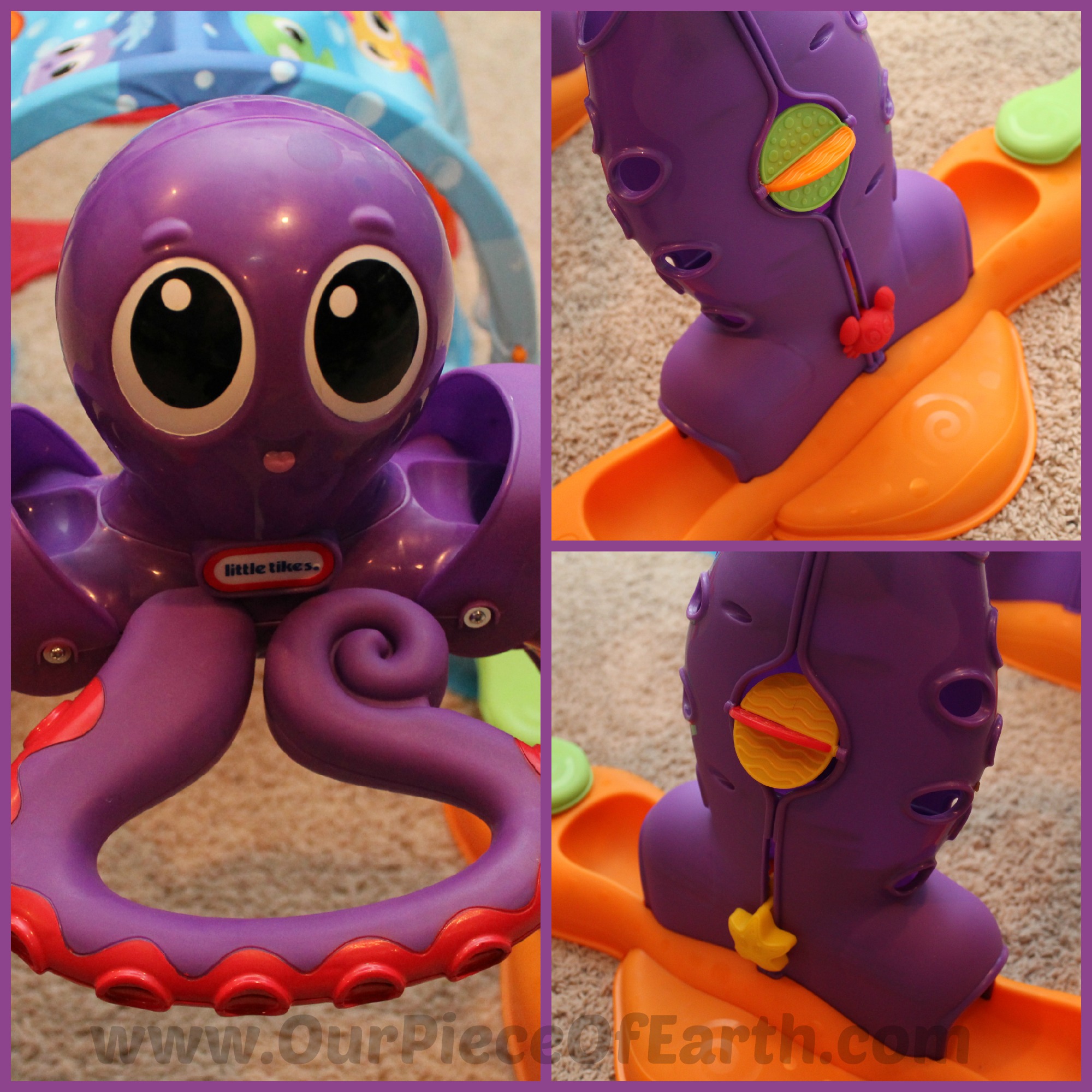 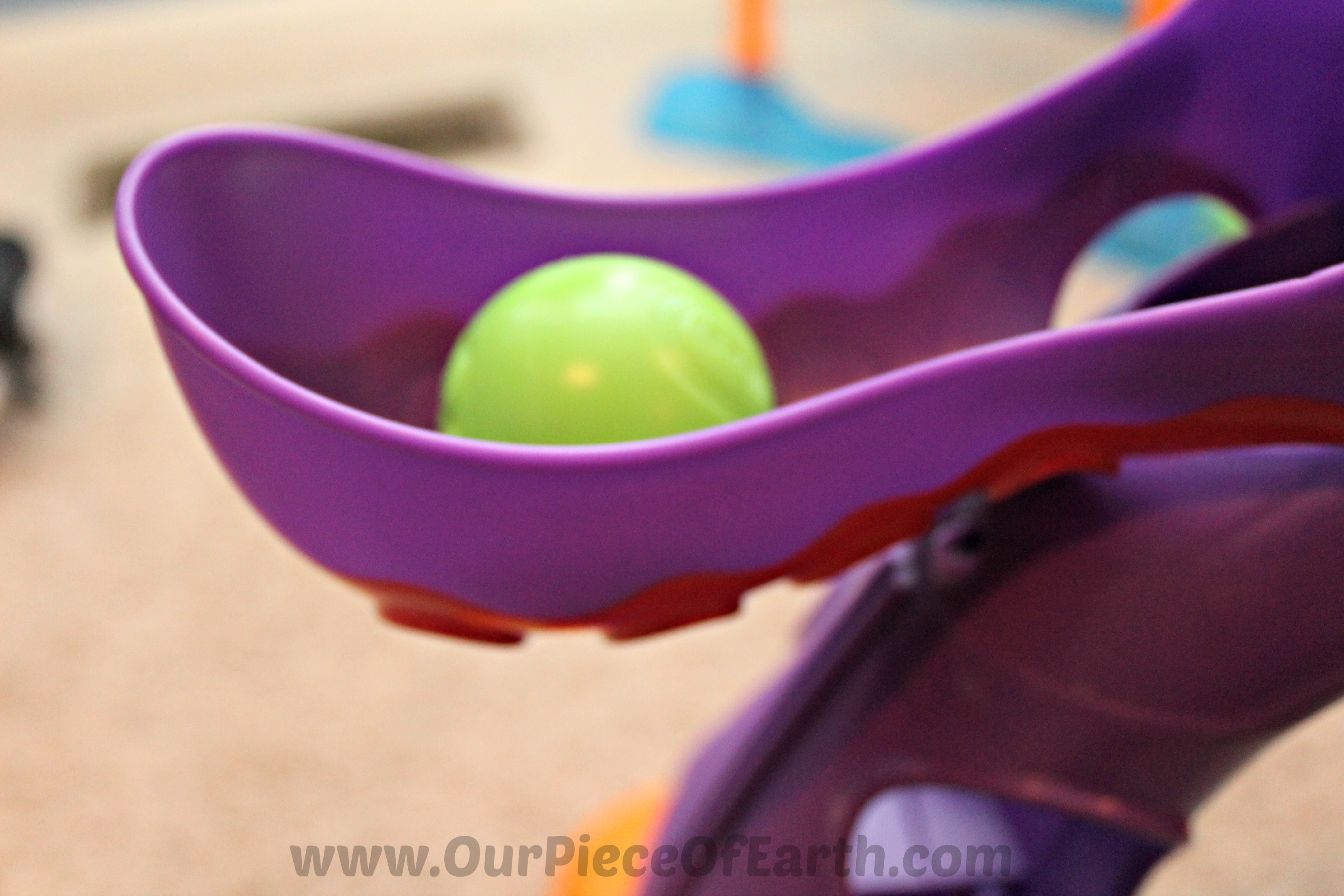 The octopus is ready for your little crawler or stander.  Henry is crazy about balls and loves these 4 colorful balls that come with it.  When not in use, you can store them right in the octopuses arms.  The arms go up and down so your little one can drop the ball through and cheer in delight as it turns up at the bottom.  With a little spinner on each side and a sea creature they can move up and down making fun clicking sounds, Henry gets sidetracked when he goes to retrieve the ball.  As your child learns to stand, the octopus lets loose some fun sounds and music to encourage your little one to do it again and again.

This toy is so much fun for Henry, and to be honest, both Maggie who is almost 5 and Charlie who is 3 have fun playing there too.  Mostly they have fun playing with Henry and showing him how to do all of the things on it.  It seems like every time he plays with it he finds something else that he has fun with. 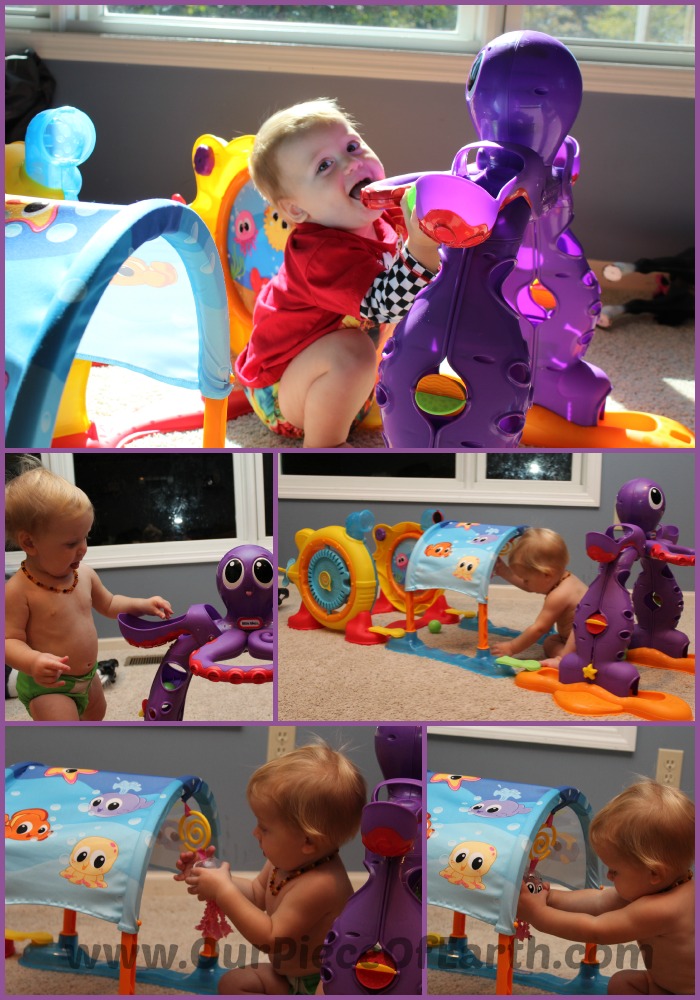 If you are looking for a fun, engaging and interactive toy that can keep up with your rapidly growing baby, the Little Tikes Lil’ Ocean Explorers 3-in-1 Adventure Course would make the perfect toy {and gift}.  Designed for ages 6 months through 36 months, you will get tons of use out of this instead of it being just another baby thing that you are done with in a month.

Buy it:  Head on over to Little Tikes to pick up one for your little mover and let the underwater adventure begin.