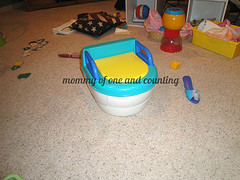 Today has been an off day with Charlie going potty, which makes me laugh.  I wanted to write an update post on how it was going with elimination communication.  Aside from the fact that we have had a lot of misses today, we have been really successful lately.  I try to write mostly informative posts, but I am super busy and it will probably have to wait until after the New Year, or at least until after Christmas. Over the weekend,  I feel like something really clicked.  We have been doing really good for awhile now, and by we, I mostly mean Charlie, but let’s face it, the parent plays a big part in EC.  On Saturday, I set him on the potty throughout the day, and realized that quite often, I had held him on the potty and waited and waited and waited until he went.  Sometimes it would be quick, sometimes not at all.  Well, all of a sudden, whenever I held him on the potty, he was going right away.  Even if he didn’t have to go, you could see he was trying to pee.  Sunday was the same thing, hold him over the potty, and he went right away.  I was sure that he finally realized that when I held him on the potty, that it was time.  Then today hit.  We failed miserably at going on the potty.  Don’t get me wrong, he still went 3 or 4 times, but most days, he goes a lot more.  Oh well.  He is a baby!  Is it odd that I am excited for him every single time?!  Today, even Maggie decided to hop on the potty train!  Yay!!!

Okay, I promise though, the next EC post will be an informative one!
Have you or anybody you know tried EC?  How old was the baby?  Did you find it much easier than potty training a toddler?
Want to read the other EC posts?  Part 1, Part 2.