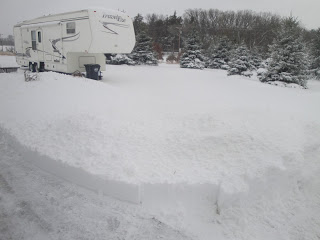 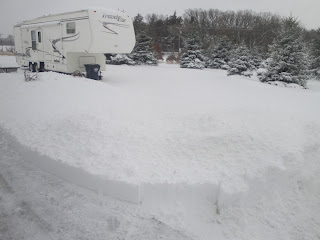 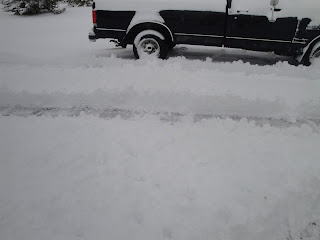 Hurray!    Overnight we got our first big snowfall of the season, at least in our part of the state.  I can’t believe that they shut down pretty much every school around and today really is a snow day.  This is either the first or second snow day in the school I graduated from in 15 years.  I don’t really understand that, yeah, it’s a foot to a foot and a half of snow, but it’s Minnesota, this is to be expected!  Oh well.  Doesn’t matter to me except that Maggie’s last day of Little Picasso’s class was canceled.  I love reading my facebook updates today and everybody with kids that had to stay home is happy about it.  Everybody that still had to drive in it is not.  This winter has been so mild, this foot and a half of snow feels like nothing compared to how much we got dumped on last winter!  We live out in the country and our driveway is pretty long and there is no way that I can go out long enough to snow blow with the munchkin, especially last year when she was much younger.  Last year, the snow drifts were halfway up our garage door, so I will take this beautiful, white, fluffy stuff.

So while Daddy went out to snow blow the driveway, me and the Monkey went out to play.  I love when I ask her if she wants to go outside, she goes running to the door and knocks on it or hugs it.  She LOVES playing outside, doesn’t matter how cold it may be.  Unfortunately, she has an icky cold, you know the kind, where your nose and eyes don’t stop running 🙁  But, I’m the mom who still takes her munchkin out to play if it’s nice out, and it is nice, it’s 34 degrees out 🙂  She loved watching daddy blow the snow and just watched him part of the time.  Then she took the tennis ball and tried to play fetch with the dog.  This didn’t work well with her mittens on, but she didn’t care.  Then she decided to pull her sled around instead of let me pull her around, at least for a little while.

There is just something about a snow day that is extra fun!  If we let her, she would never come inside!  She is one of the only toddlers her age that I have ever met that loves getting her snow stuff on so she can go outside and play.  Now she stands at the window babbling about going back outside.  I’m so grateful to have a munchkin who loves being outside in the snow as much as mom and dad do.

For those of you that have snow, what do you do on a snow day?